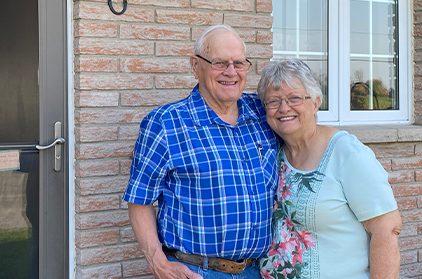 When we marry, we expect it to be forever. We enter into it with the belief that it will be through good times and bad, till death do us part. It’s no secret that this doesn’t always happen and many people enter their later years alone. While we often think that love is a song played only for the young, sometimes you come across a story of people who hear it in their golden years.

Sometime after his wife’s passing, Wilfred Leonard decided he did not want to spend the rest of his life alone, and asked his neighbour Karen McRobert to join him for coffee. “I tried catching her one day before she went back inside to see if she would like to go to dinner or something, but she was too quick. So, the next time I saw her getting something out of the trunk of her car I made sure to go over and invite her out,” shared Wilfred.

From there, their love grew and after a short time, Wilfred and Karen decided to get married. Karen explained, “We had talked about it, and decided we wanted to spend the rest of our lives with one-another. We figured there was no point in waiting two years because we didn’t know how much time we would have.”

With the help of the family, the couple hosted a beautiful wedding under the gazebo at their church with immediate family this past August. Karen shared, “When we told our families we were getting married, my daughters picked it right up! They took care of everything and did an awesome job.” 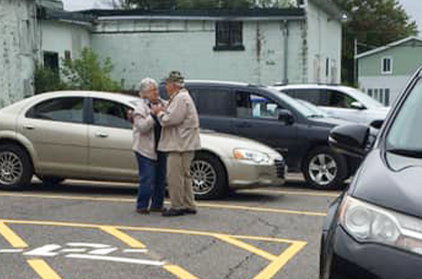 Shortly thereafter, the newlyweds decided to go to the Nor-Dun Diners Drive-Thru in the fall and were met with a surprise. While they were waiting to pick up their meal, an entertainer sang a song in honour of their recent marriage. Wilfred and Karen got out of their car and started dancing in the parking lot. An announcement was made sharing the recent marriage, and diners began honking their cars in celebration of their special day. “We got up, and they started cheering us on,” Karen shared in excitement.

Now, as we approach Valentine’s Day the couple is grateful to have one-another during the COVID-19 stay home order. Karen explained, “It’s been great just having each other for company. You know, we’ll go for a drive and go down a new road just to get a change of scenery.” Although Karen is quite content to read books and to stay home, Wilfred enjoys being out of the house. Prior to COVID-19, Karen and Wilfred would go out a few times a week for coffee and to chat with the locals and would frequent the Nor-Dun Support Centre social programs.

Karen and Wilfred share the following advice for couples trying to get through the stay at home order: It’s important to be able to apologize. When you hurt someone or say something that’s not quite right, you need to be willing to say “I’m sorry, and I love you” before the end of the day. Don’t let it drag on. Telling each other you love one another is so important in any marriage, and especially when you’re together all the time.

The Carefor Community Support Centres act as hubs for hundreds of people, each with their own story to share. Read some of their stories here.